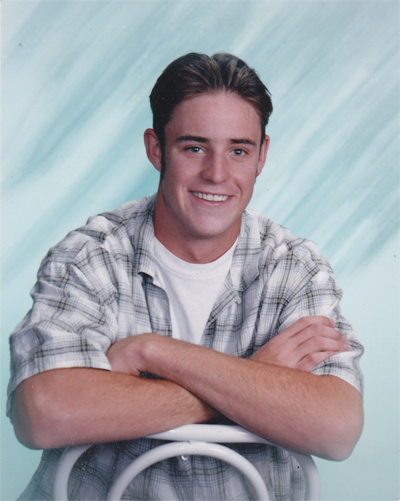 Ricky Lee Woodring, born on February 1, 1981, was a happy, sweet and loving child. Until his untimely passing, Ricky grew up with his father Ron, his mother Vickie, and his sister, Katie, who is three years younger. Family, friends, teachers, coaches and all who met Ricky agreed that he was one of God’s special creations.

Ricky had a way of making everyone feel very special and many of his peers considered him to be their best friend. His background of music ( piano, guitar, saxophone, vocal, composing), sports, writing, target shooting, philosophizing, and leadership qualities brought him much admired attention. However, Ricky’s greatest legacy is the way he touched people. He always held other peoples’ feelings above his own. He would encourage me as a mother, by saying, “Mom, even if I tease, I’m nice to everyone”. It’s hard to believe God chose me to be the mother of someone so very special.

In Ricky’s writings, he addressed the difficult times one experiences in this world. He said he “ had to look above for the answers” and not rely on himself. Ricky wrote that no matter how hopeless a person may feel over something in this life, to always remember that “God has a plan for you and me”, so “Live fully until death”

Ricky’s life was goal oriented, and he was driven towards achieving those goals. His integrity and loyalty as a friend and family member were fine examples for anyone to live by. Ricky’s grandmother frequently said, “Ricky’s sweet nature was that of ten good people combined”. His hugs, freely given, his big smile, his cheerful “good morning”, and his good night kisses will always bring smiles to my heart.

Listen to some of Ricky's recordings